The internet has never been faster than it is today. It is also very cheap.

However, it is vital to invest in a good router in order to reap the maximum benefits of this extremely useful tool.

ASUS has been producing top-of-the-line internet routers for a long time.

They have been in the tech industry for over 30 years and have a good reputation for rolling out top quality products. They offer a wide range of routers; but today we will be comparing the ASUS RT-AC68P, RT-AC68U, and the RT-AC68R.

The AC in the name stands to represent the router’s 802.11ac Wi-Fi standard compliance. However, there are some key differences between these three products worth pointing out.

Due to them being from the same company, users become confused as to which product to go for. This is exactly why we have this comparison ready for you. 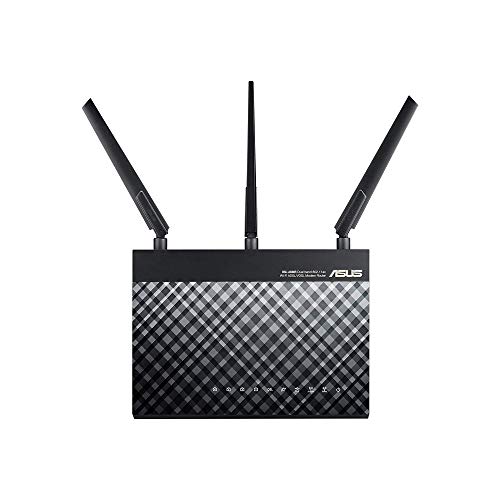 Moreover, the dual-band data rates help bump up speeds to about 1900Mbit/s. The dual-core processor makes things so much better as it helps increase the system speed.

The ASUS RT-AC68P is also equipped with TurboQAM technology from Broadcom. This contributes to the already fast data rate and overall better performance as compared to its rivals.

The RT-AC68P has not one, not two, but FIVE high-speed gigabit ethernet ports. They have got the wireless and wired part of your internet covered pretty well. There are also two USB ports – both 3.0.

It can also support gaming as it comes ready for NVIDIA GameStream. This ensures uninterrupted gaming sessions, which is exactly what gamers want!

The QoS is also commendable – you can prioritize and allocate bandwidth for each user. The ASUS RT-AC68P can also be used by multiple users at the same time without any lag whatsoever. It really is quite an amazing device.

We’re not done yet. The ASUS RT-AC68P is just that good. Its got VPN support for all your privacy needs, along with superb parental control options in order to keep the younger ones in check.

Moreover, ASUS’ AiRadar technology makes sure the device’s range is extended without using any extenders or repeaters.

The only thing we did not quite understand was the lack of MU-MIMO support for data streaming – given a router of the RT-AC68P’s level, it really should have had this feature.

The combined dual-band data rates that the ASUS RT-AC68P has helps it to reach speeds of up to 1900Mbit/s. This is three times faster than the performance of 802.11n routers.

The Broadcom QAM technology equipped increases data rates to 600Mbit/s for a total of 33% overall increase in performance. It also has ASUS AiCloud that helps users access, sync, and share data regardless of where you are.

A private cloud server can also be made with friends and family. The table below shows some of the pros and cons of ASUS RT-AC68P.

The ASUS RT-AC68P is a router that is perfect for bigger homes, businesses, and in situations where there are many gamers!

The ASUS RT-AC68P is perfect for all your gaming needs – there is virtually zero lag and no matter how many devices are connected; your connection will never be interrupted.

The ASUS RT-AC68U was launched about two years before the RT-AC68P. However, it still has a lot to offer!

This dual-band router also supports Broadcom’s TurboQAM, propelling it to speeds of up to 1900Mbit/s. It supports 802.11ac technology and has an 800MHz dual-core processor.

It also comes with two USB ports, but one is 2.0 and the other 3.0. it also has four-gigabit Ethernet LAN ports. The LEDs can be turned off as well in case you ever get annoyed. Parental control options also exist for this device.

The ASUS RT-AC68U is also one of the fastest routers to be tested in both AC and N bands. It destroyed every past speed record. Here is how it fared.

This makes the ASUS RT-AC68U undoubtedly one of the fastest routers out there.

Some other features include AiCloud, NVIDIA GameStream Ready, and AiRadar are included with this device as well. It is very closely related to the aforementioned ASUS RT-AC68P as that was made keeping the flaws of this one’s design in mind.

However, that takes nothing away from the AC68U. It is also very fast and provides efficient performance, just a touch less than the RT-AC68P. Setting it up is also easy – the ASUS Quick Internet Setup guides you through the process and helps you connect to the internet very quickly.

It can definitely be considered, although it does not have a preconfigured network setup. This could prove a little difficult for novices.

The table below lists some of the pros and cons of the ASUS RT-AC68U. 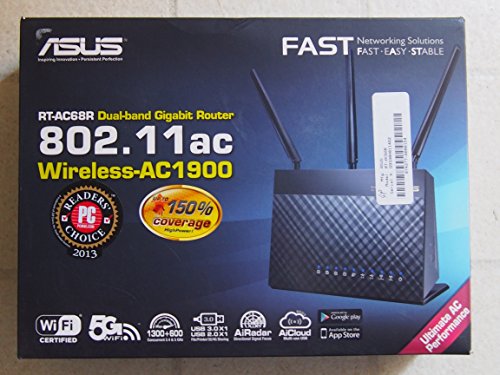 It is sold online as opposed to the ASUS RT-AC68U.

The ASUS RT-AC68R is equipped with 802.11ac technology and has a quick 800MHz dual-core processor. It also comes with TurboQAM from Broadcom that can help the RT-AC68R achieve speeds of up to 1900Mbit/s. USB and Wi-Fi transmissions are also differentiated against for added efficiency.

The dual-band RT-AC68R offers two USB ports. However, unlike the RT-AC68P, only one of them is a 2.0 port. The other one is a 3.0 port. There are also four different LAN ethernet ports you can use for wired transmission.

The ASUS RT-AC68R, just like the RT-AC68U, features good parental control options. The LEDs on the router body can also be turned off in case you want to keep the room dark.

Some other bells and whistles include AiCloud, AiRadar, and NVIDIA GameStream Ready – this makes the ASUS RT-AC68R one of the better routers out there.

The ASUS RT-AC68R, like the RT-AC68U, is also one of the fastest routers to be tested in both AC and N bands. It destroyed every past speed record. Here is how it fared.

You might be wondering what AiCloud is, which is why we have added this section for your convenience. AiCloud is basically a tool used to access a local network away from home.

It is provided in the form of an app, available to both Android and iOS users, and is extremely easy to use. In fact, it is easier to use than other rivals.

All one needs to do is connect to a Wi-Fi network near them – this grants permanent remote access to your router. Though the interface seems a little dated, the app is super easy to use and you will find yourself connected to your servers in no time.

Moreover, there are three features that AiCloud offers:

Cloud Disk and Smart Access are all hassle-free. However, Smart Sync requires you to have an ASUS subscription that comes with a monthly fee.

As obvious as it sounds, the ASUS RT-AC68P seems like the best option to go for. It is an updated version of the previous RT-AC68U and has more speed, performance, and efficiency on its side.

Although the speed is not all that different, the 68P definitely has an edge, especially if a user runs a small business or just needs that extra speed sometimes.

As we mentioned earlier, the RT-AC68P is basically just an updated version of the RT-AC68U. Bugs from the older one have been fixed, for instance, the USB 3.0 port issue: the Wi-Fi signal from that port was a little unstable and the AC68P addressed that.

The USB 3.0 storage performance in the AC68P is now much quicker. Also, it has a slightly better processor, as compared to the previously rated 800MHz processor on the AC68U.

However, if you do not need that extra speed and have nothing to do with the USB 3.0 ports, we would suggest you go for the ASUS RT-AC68U. With that being said, the ASUS RT-AC68P is our choice.

It really comes down to budget and requirement – if you are part of a household that does not need a lot of bandwidth and everyone uses it lightly, the ASUS RT-AC68U is ideal. It has a lot of capabilities and offers some bang for the buck.

However, ASUS RT-AC68P is the best of its kind. It is one of the fastest Wi-Fi routers in the world and will never disappoint you should you decide to go for it.

It is perfect if you are a part of a bigger household where everyone uses the internet quite a bit. Connections are uninterrupted and range is brilliant too – you are not going to regret buying this router from ASUS.

We hope we have helped your decision-making process with our comparison. Remember, it is your decision and your money, so make sure your research is up to date. Happy surfing and thanks for reading!